While we’re waiting, a poem from Unfinished City 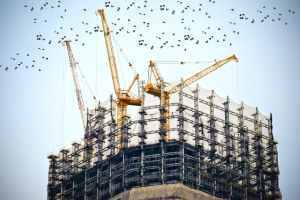 I will do a coordinated announcement about my new book in the near future with the editors of the press–with whom I’m so happy to be working!–but for now, I would like to share with you the title, Unfinished City, and the title poem, which was first published (as “In the Unfinished City”) in a print journal, Jews., that is now gone, but its address and one of its editors, Lawrence Bush, have migrated to the present-day Jewish Currents magazine.  This was a while back–the Jews. Spring 2001 issue; I think it is the earliest published poem from the collection.

The “Unfinished City” is the city–and the better-remembered tower–of Babel.

Passing the house where you once lived, I found

no change I could discern, and so I mourned.

Had something changed, I’d have mourned that too.

But why should bricks and mortar, plumbing, plaster,

laths, electrical wiring have such permanence

when you’ve left no memento of your presence,

which in its time was solid and complete?

Complete and solid in me lies your absence

since that wretched day when language broke apart

and what I spoke was sensible to me

and what you spoke was sensible to you

but neither understood the other’s speech.

Lovingly I took your words into my mouth,

but they were foreign.  I had to spit them out.

Because the book grew from encounters with the weekly parashot (more about how that happened, and how it evolved, anon), I’m planning to post occasional poems from the book here over the course of the year when I think I have something to offer, however small, about an upcoming parsha.  This poem, though, responds to parshat Noach, the second regular portion of the year, which was read this year back in early November.  For some reason, in 2000, it wasn’t the Noah story that tugged at me, but the Babel one:

The LORD came down to look at the city and tower which man had built, and the LORD said, “If, as one people with one language for all, this is how they have begun to act, then nothing they may propose to do will be out of their reach.

“Let us, then, go down and confound their speech there, so that they shall not understand one another’s speech.”

Thus the LORD scattered them from there over the face of the whole earth; and they stopped building the city.

Comments? Questions?  I’d love to hear from you.