Slouching toward Jeopardy!, part 15: the eye of the storm

It’s great to have the airing of the quarterfinal game behind me!  I was kind of anxious and keyed up last week.  I felt weird and exposed and everything was heightened and I had trouble with naming the feelings I was having.  (I actually wrote a poem, years ago, about the attribution of emotion; it’s the title poem of my first book, Rope Bridge.)  Maybe there just isn’t a word for the emotion of achieving a long-held goal while also feeling unpleasantly exposed by the very medium in which that goal has to be accomplished.  (You know, publishing a first book is a little bit like that.  But it was a book of poems, so the exposure was objectively much, much smaller.)

We held the viewing party in the library at school and I cannot think of one thing that would have made it more awesome.  We had students, pizza, a giant prop check from Farmers Insurance Thank America’s Teachers, people from Jeopardy!, a local Farmers agent handing out prizes at commercial breaks, and–fantastic surprise!–Jimmy from the Clue Crew.

.@WeAreFarmers hosted a viewing party here in L.A for #TeachersTournament contestant Nan Cohen and Jimmy was there to capture the moment! pic.twitter.com/qp9wGaglHJ 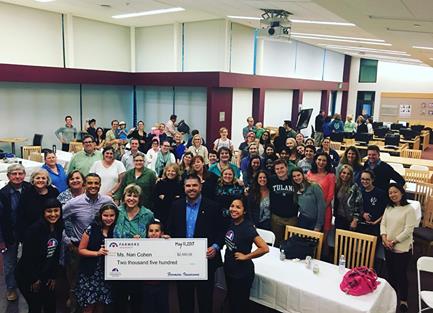 We also invited people to play along and pledge money for their correct answers to the Friends of Kayany, a U.S. group that supports the Kayany Foundation in its efforts to provide education and nutrition to Syrian refugee children living in Informal Tented Settlements in Lebanon.  It was really fun to watch the students and staff play along and cheer one another’s correct answers.  And we raised over $2000!

Although I remembered little from the taping of the game, I did remember that it had taken me a little while to start buzzing in, partly because I needed to let a bunch of TV DRAMAS questions go by and then I needed to get lucky on the buzzer.  I think people at the viewing party had time to get worried, because they gave me a big round of applause when I finally rang in (category: ONCE UPON A TIME) on the clue In some versions of the fairy tale, she survives only after the woodsman cuts open the wolf and frees her.  It was as if they were worried I might not get anything after “Little Red Riding Hood.”

I could feel people relax after I got a few clues in a row in the category THIS IS “US.”  I know I had a really odd look on my face for the Daily Double question in that category: Violinist Jascha Heifetz was born in this Baltic capital in 1901. The reason is that we’d just heard the name Vilnius that morning in the contestant briefing.  I remembered it as an example of how, if you don’t know the pronunciation of a word, you should try to pronounce every letter.  Andy Saunders of The Jeopardy Fan just reminded me (before this evening’s Live Panel roundtable, which you can watch here) of an instance when a contestant transposed two letters and wrote VILNUIS, which was ruled incorrect.  I believe that was part of the briefing, too.  So when I looked puzzled, answered the question, and then glanced at Michael and Lindsey, it was an “Are we being punked?” moment–in my head, anyway.  I know it wasn’t intentional–the contestant coordinators don’t get anywhere near the questions, and I’m pretty sure I’d heard the same example in the previous year’s briefing (with no mention of the Baltic or Heifetz).  It was just one of those weird coincidences.  Nice, though, to learn that I share ancestry with Heifetz–my great-grandparents were Jews from Lithuania.  (Although I’m definitely no Heifetz.)

Looking at the scores going into Final Jeopardy!, I am surprised that I bet to win the game.  I had $15,400, which was almost certainly going to be good enough for a wild card.  I remember seeing that the category FOREIGN WORDS AND PHRASES and knowing that Michael, who had $11,400, taught Spanish and had studied French and Portuguese. I figured that he would bet to win, and that if I could get it, he would almost certainly get it too.  It was still a risk to bet, but it turned out okay:

Often used to describe artists ahead of their time, it was also the name of a youth militia in WWII Vichy France.

As so often happens, getting this one wasn’t really about knowledge, more about parsing the question correctly and making a lucky connection.  Everyone I know who didn’t get this nevertheless knew the term, including Lindsey (who put ingénue, a much more resourceful guess than I would have been able to make if it hadn’t come to me).  But both Michael and I put avant-garde; I won the game, but he boosted his score to $14,800 and in the end we both made it to the semifinals.  I play Tuesday, he on Wednesday.